During these harder times, we are offering FREE online classes!

Sign up for the free All Swing News email
to get the passwords for the events below.

All times are set for Eastern Daylight Time 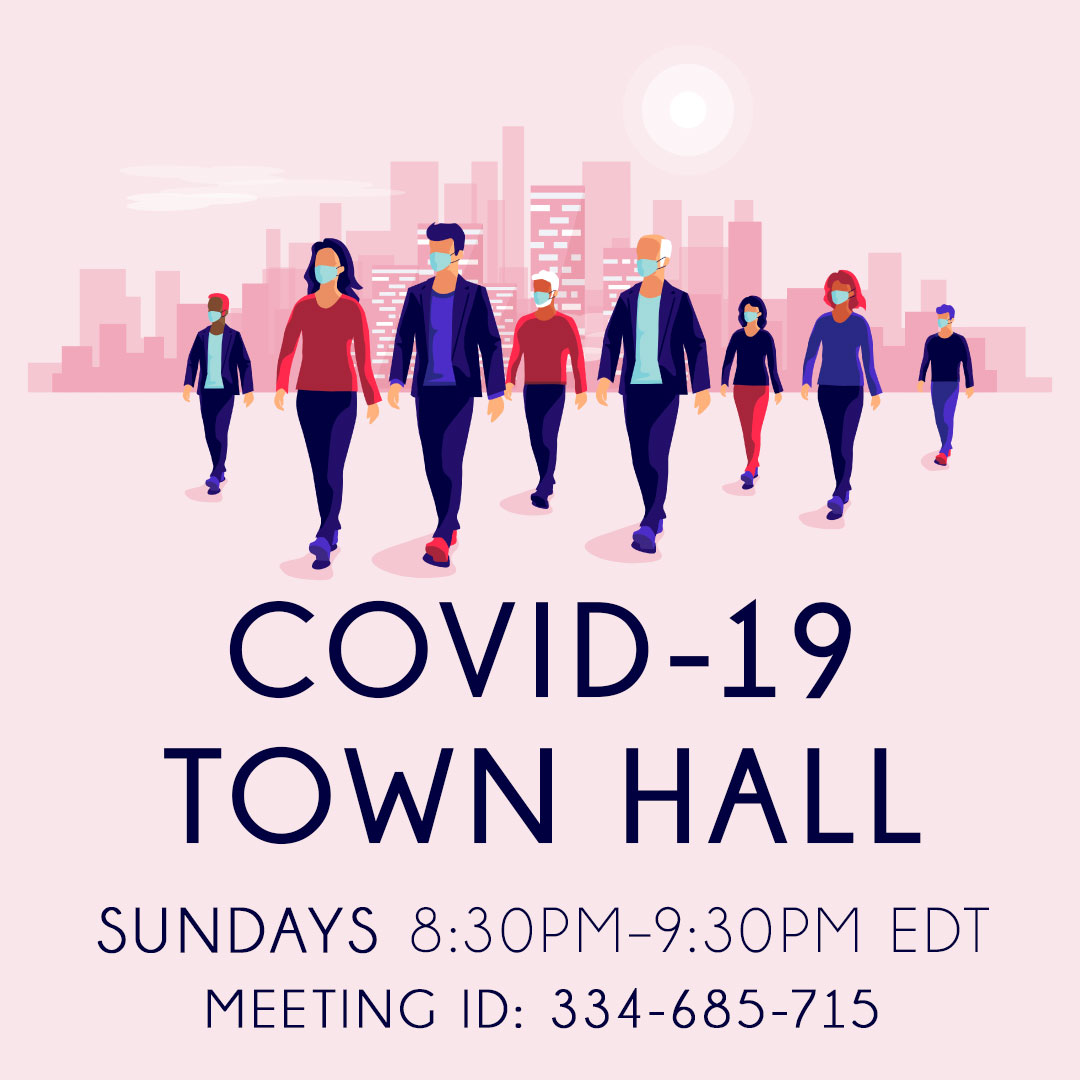 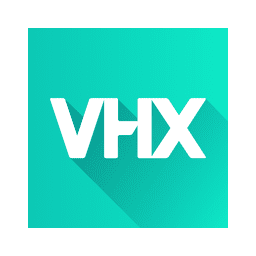 Catch Up on Past Classes

Watch & review at your pace
on the VHX All Swing Library 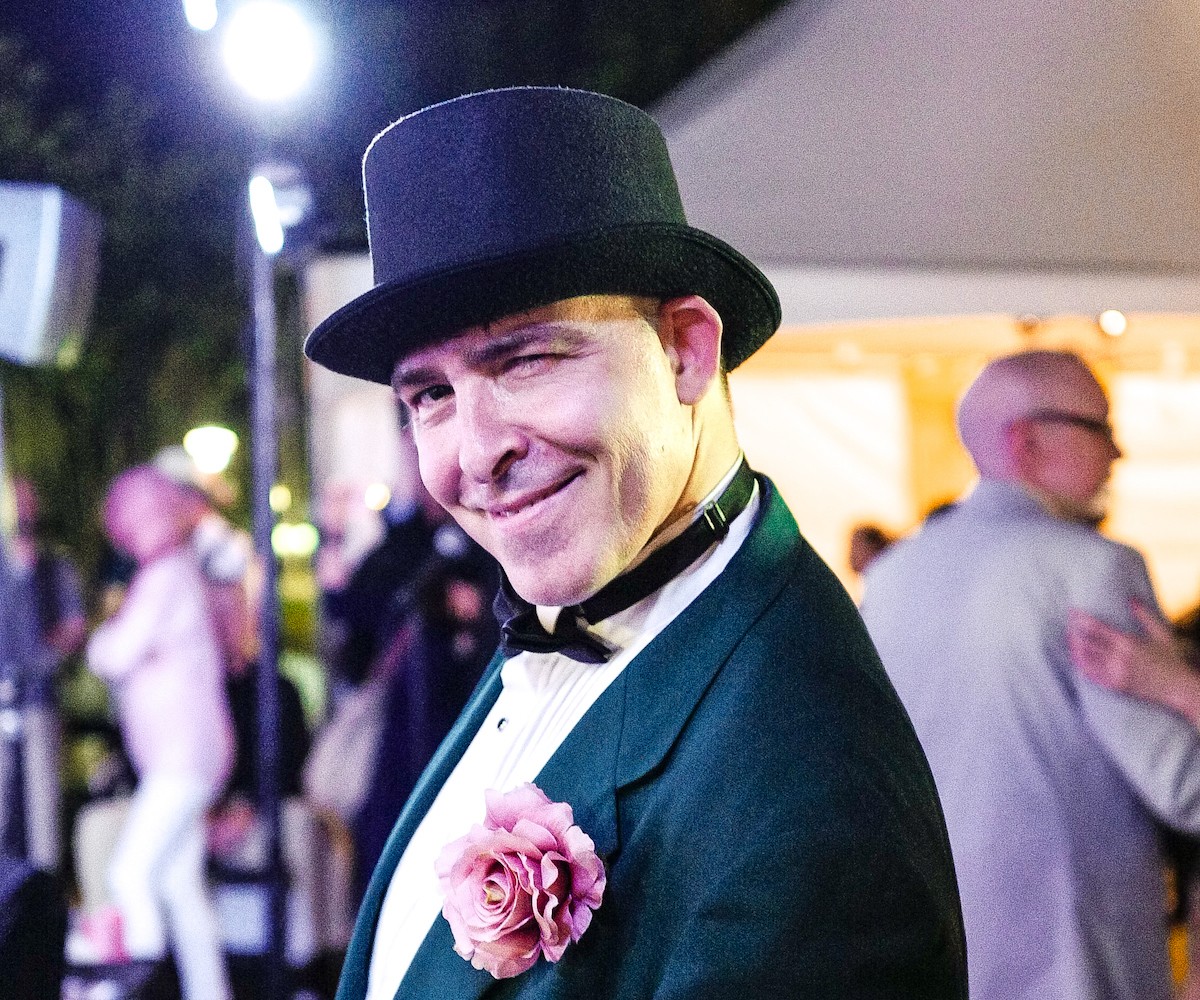 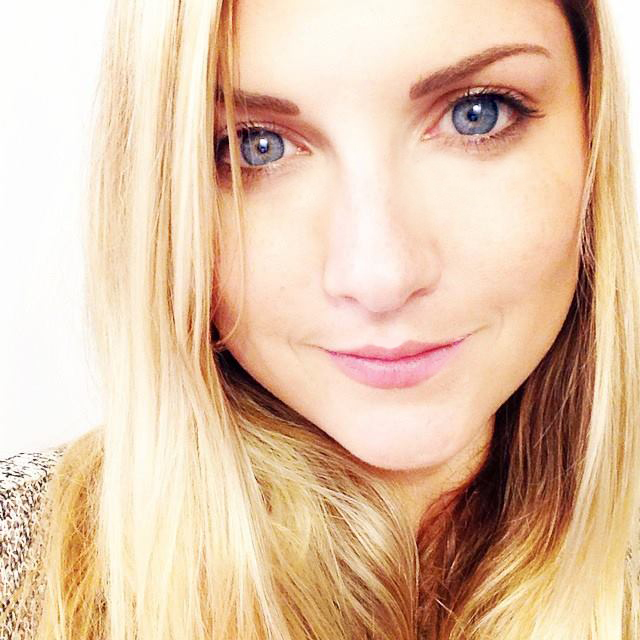 Juls has travelled around the world teaching with Yuval since 2009, instructing students with his unique techniques and knowledge of body movement. 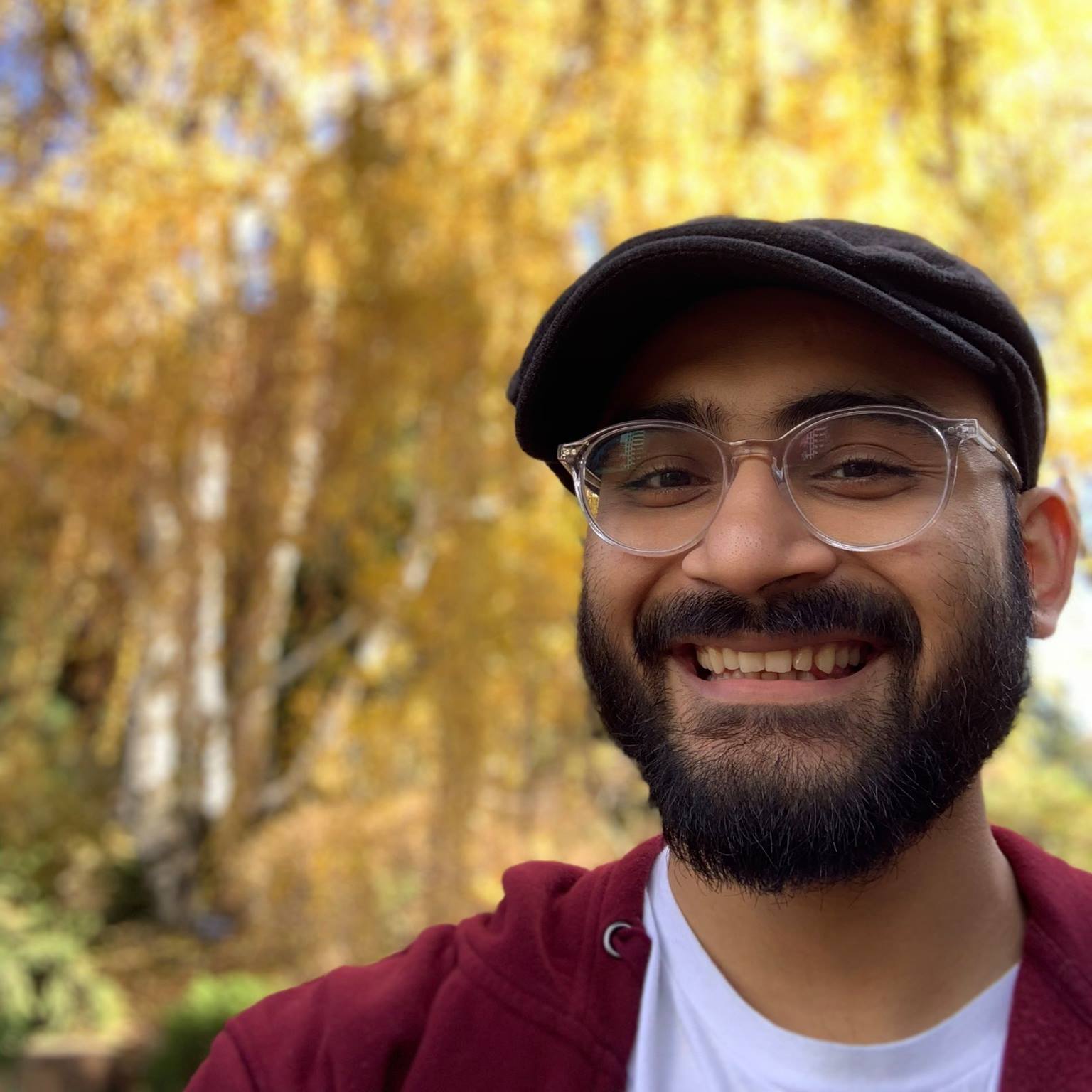 Known around South Florida as the 100 day challenge jazz man, Sid inspires and promotes the love of jazz dance wherever he goes! 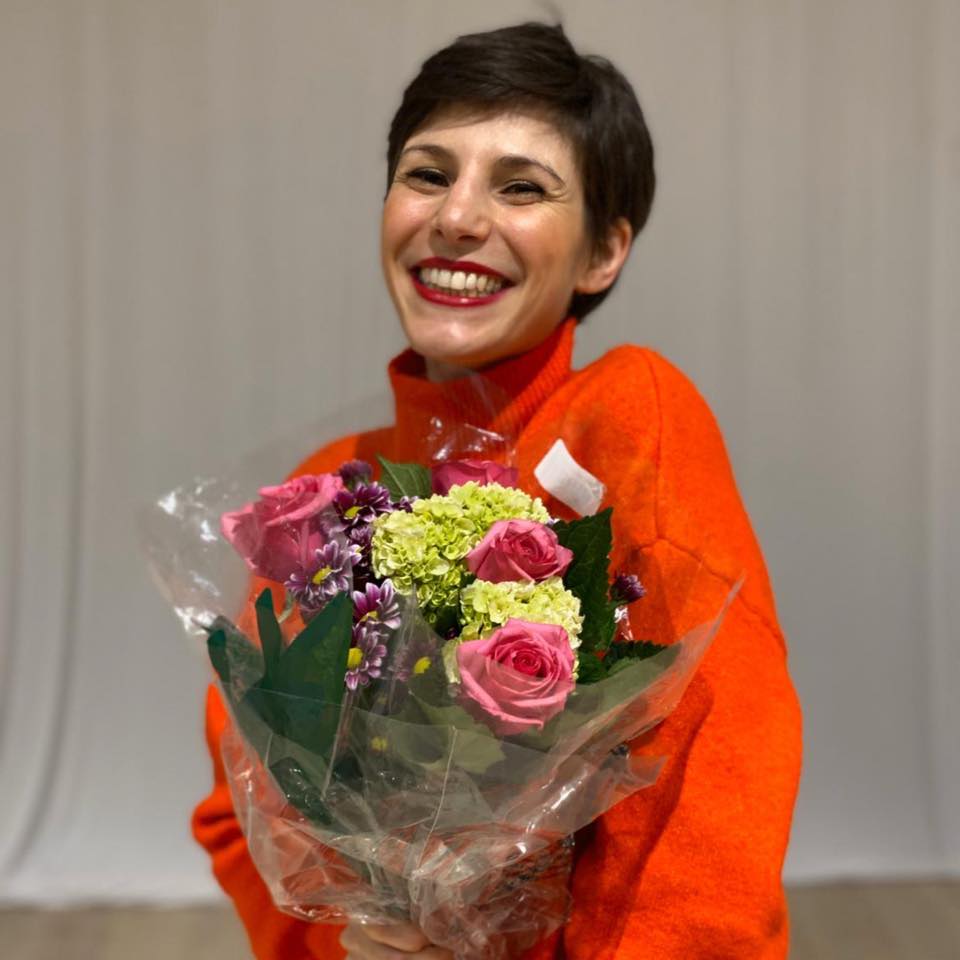 This Italian globetrotter has now settled in Miami after several years of honing her dance skills in NYC. Catch her high energy and infectious personality in these classes!

Time to get your cardio in... Learn and practice the dance that gave birth to Lindy Hop!

Yuval & Juls will show footwork and moves for dancing solo, as well as for couples.

Spotify Playlist Solo Jazz
Zoom Meeting ID: 858-432-6234
Password is in your email
Don't get All Swing News? Sign up here

💃🕺Whether you have a partner or quarantining solo, learn and practice swing outs using the LinDNA diagram and concept!

❓What's LinDNA, you ask? There is a basic structure in swing that Yuval has visualized for you into a diagram on the floor. So grab some masking/painters tape (if you have), and create your personal coach at home! This will help for both singles and couples in the class.

*Prerequisite: In this intermediate level class, you should be comfortable with basic 6/8 count moves, and have a basic understanding an 8 count swing out. 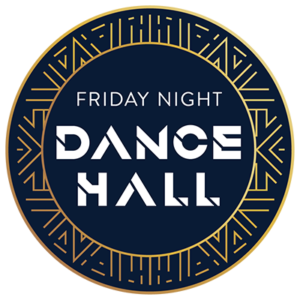 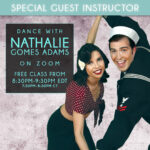 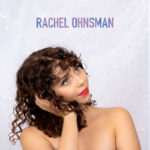 by Rachel Ohnsman
Live in Miami 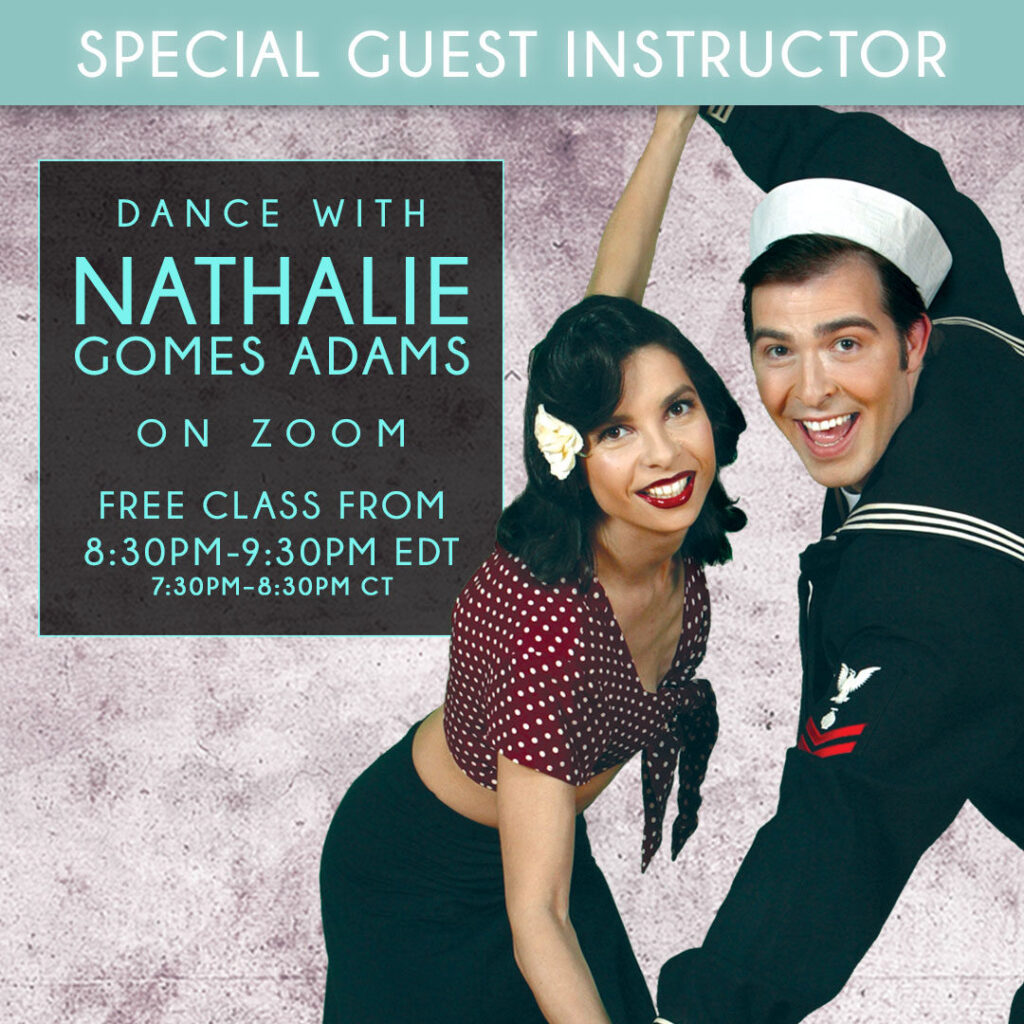 Four time World Swing Dance Champion Nathalie Gomes Adams is known for her fearless gravity-defying aerials and award-winning choreographies. She has taught, performed and judged around the world, as well as opened schools in NYC and NoLa. When she's not flying high in the air, Nathalie stays grounded with her dance troupe Les Rebelles.

In this dance class, we'll start with a short warm up that includes vocabulary specific to the dance we are working on, and then we work on the choreography. So you actually learn a style of dance, technique and not just choreography.

Completely optional, but every amount is greatly appreciated and keeps this going!
Send a tip directly to Nathalie via PayPal

Dress up and dance at home to LIVE MUSIC by 5 String Swing! Violinist Steffen Zeichner plays for your listening and dancing pleasure. 🎻

Steffen Zeichner is a creative violinist who actively performs jazz, classical, klezmer, and a variety of other genres.

A native of Gainesville, Florida, Steffen currently plays with several ensembles and orchestras throughout the South Florida area. He is the leader of 5 String Swing, a lively jazz violin led band that regularly presents shows of Jazz, Swing, and American Standards.

Completely optional, but since people have asked...
Send a tip directly to 5 String Swing!

Every amount is greatly appreciated. 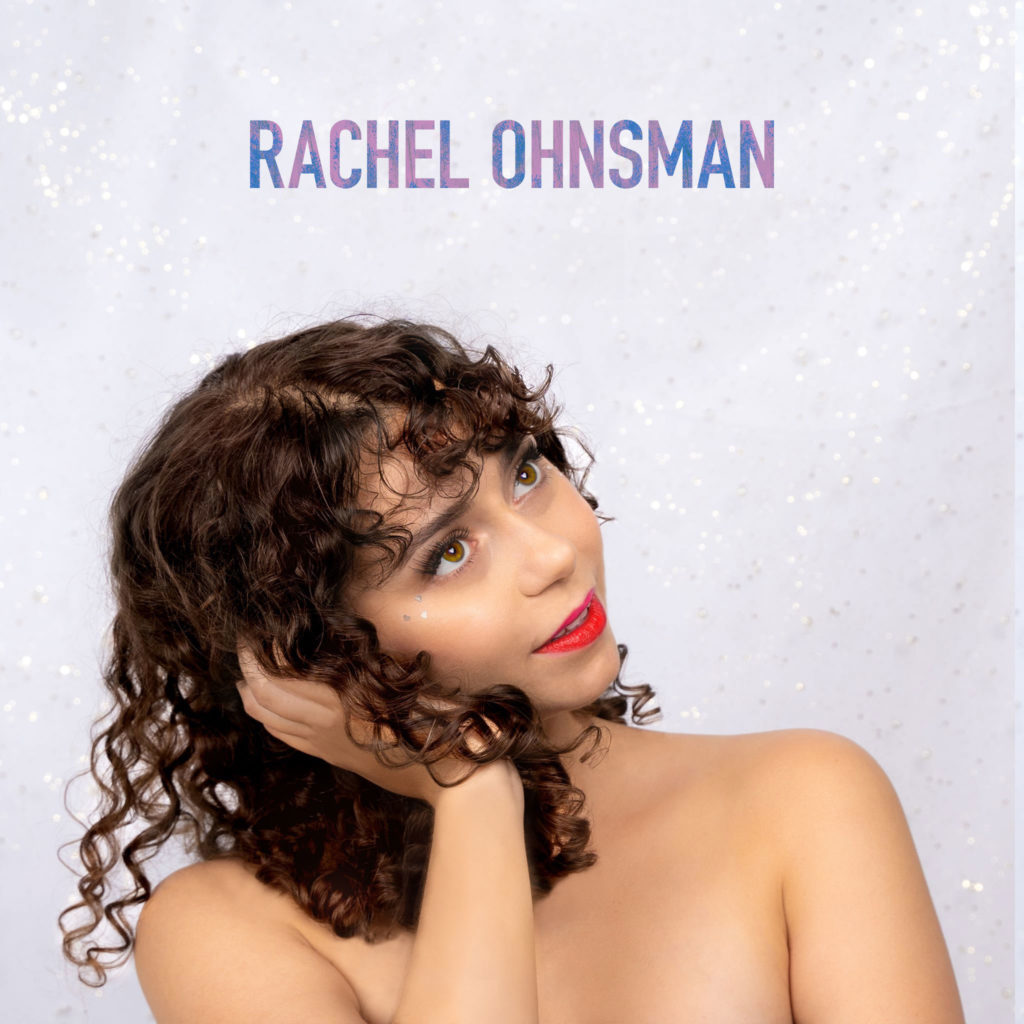 Friday during the dance
Rachel Ohnsman is back for a special vocal performance!

Growing up in Reading, Pennsylvania, singing in choirs and accompanying on piano, Rachel Ohnsman moved to Miami in 2014, studying classical voice and vocal jazz at the University of Miami Frost School of Music. In 2016, she was a finalist in the theatre division of the Classical Singer vocal competition. In 2017, Rachel presented at TEDxUMiami with her talk, “Breaking Genres.” In 2018, she released her debut album, Lovers, which she wrote, arranged, and co-produced. Rachel is currently producing two concept albums, Moon Songs and Nuclear Family, which are engaged in a friendly Kickstarter competition to raise funds.

Rachel has toured the United States, Europe, and Japan as a solo act and in professional ensembles, at venues such as Carnegie Hall (NYC), Stephensdom (Vienna), and All of Me Club (Tokyo). On the stage, Rachel originated the role of Mary in Awkward: A Song Cycle, and recently played Natalie in Next to Normal (CaneStage). In addition, Rachel has music directed several musical theatre productions with amateur and professional casts, including Violet, 13 the Musical, and Cats, as well as a sold out weekend of Miguel Luciano’s cabaret. She was recently selected as the Music Apprentice for Transcendence Theatre Company in Sonoma, CA. Rachel is currently co-writing her first full-length musical, The Best Years, with collaborator Alexis Kesselman.

Rachel’s compositions have been developed in workshops by Maria Schneider, Becca Stevens, and Salaam Remi, in addition to mentorship from Daniel Strange and Gary Lindsay. Rachel is the teaching assistant for the Creative American Music program at Frost, where she is completing a master's in Media Writing & Production. She teaches lessons in voice, piano, and composition, and works as a copyist and transcriber.

Completely optional, but since people have asked...
Send a tip directly to Rachel via Venmo

Every amount is greatly appreciated.

Real Questions. Real Conversations. Find out the how the South Florida swing dance community is dealing with and progressing during this pandemic. Ask questions, see stats, and talk to health care workers.

During these hard times, we must do what we can to protect the local dance community and postpone large gatherings until we can ensure your safety. The reality is COVID-19 could easily spread throughout our dance community. If we do what we can now (i.e. consistent hand washing, social distancing, limiting exposure to large crowds) community spread can be reduced dramatically.

Stay tuned on social and check your inboxes for future plans, as we will collaborate with the rest of the community and continue to create dance opportunities during this difficult time.

The Swungover quick guide to coping with COVID – 19